Debbie enjoying tea with her many fans

Cedar Cove is Debbie Macomber‘s fictional community that she has featured in books like 92 Pacific Boulevard, A Cedar Cove Christmas and her Cedar Cove Cookbook. Not only have fans of these books made them a #1 New York Times bestselling series, but in the last week of August some 10,000-12,000 fans from 42 states and six foreign countries (Canada, Brazil, the Netherlands, South Africa, Germany and Japan) descended upon the little town of Port Orchard, WA to celebrate as it transformed itself into the fictional community of Cedar Cove. As part of Harlequin’s public relations team I had the honor of attending the festivities. 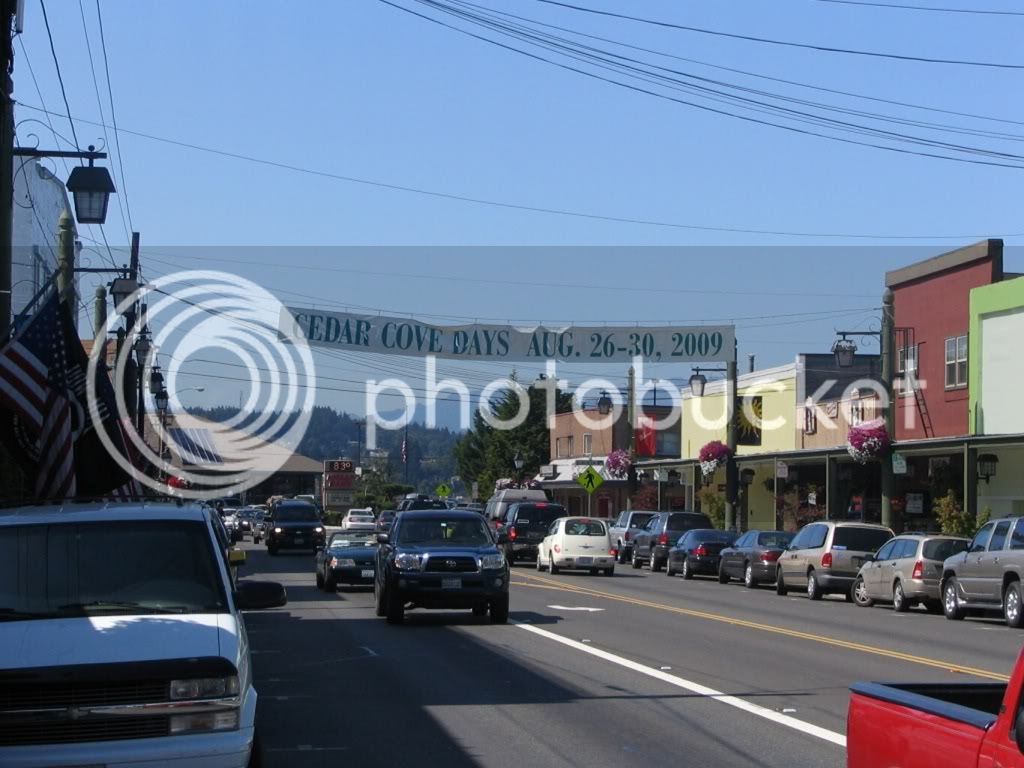 As a thank you for all the work organizers had put in bringing Cedar Cove Days from the germination of an idea to reality, Debbie held a pre-event barbecue for the volunteers at her beautiful home overlooking Sinclair Inlet on Puget Sound. Her son Ted tended the grill & I can personally attest to his skills.

Celebrations officially kicked off at a grandstand on the waterfront where the state senator, congresswoman and town mayor spoke and presented Debbie with the key to the city—the first such award in the history of Port Orchard. But what very few people know is that Debbie had already been busy shooting live television interviews from 4:00 am to 10:00 am. I have no idea how she managed to be so lively and charming over the rest of the day.

Over the next four days we were privy to behind-the-scenes peeks at the real-life inspirations for Debbie’s Cedar Cove novels. Tours were led by Debbie’s four grown children who provided us with insights that only a family member could know. Teas at the Victorian Rose Tea Room and knitting at Debbie’s Yarn Shop also gave fans an opportunity to spend quality time with their favorite author. And a great Q&A session with Debbie and her editor, Paula, had everyone in tears at one point when Debbie described the premise of her next Blossom Street book, Hannah’s Choice—trust me, you’re going to be moved!

We all got dressed up for a brilliant cruise on Puget Sound that included a dinner at Kiana Lodge on Agate Passage, just across from Bainbridge Island. Each member of the Macomber family shared memories of life with Debbie, and Ted had the entire assemblage singing his fresh Cedar Cove Rap—“Cedar Cove, y’all/ Cedar Cove, y’all…”

The highlight of the entire celebration for most people, however, was the Character Parade. Thousands of fans and residents lined the route as marching bands interspersed vintage cars carrying local townspeople portraying characters from the novels. The parade was followed by a sock hop at the grandstand and drinks at a beer garden hosted by Debbie’s husband, Wayne.

City council declared Cedar Cove Days a resounding success which was rewarding news as all of the proceeds from the events are earmarked for various community projects. As Cedar Cove Days drew to a close and everyone got ready to return to their homes, we all remarked on how beautiful the weather had been—sunny and high 70s. It certainly didn’t seem to be the typical Pacific Northwest climate. Mother Nature must be a Debbie Macomber fan, too.

Comments ( 2 )
Leave a reply
Sign Up for Harlequin News

Yes! I want to receive newsletters, special offers and other promotional emails from Harlequin*

Sign Up for Harlequin News & Save 20% on Your Next Order!


Sign up to receive newsletters, special offers and other promotional emails from Harlequin* and get all the Romance news you crave.
Plus, you'll get an exclusive coupon to save 20% on your next purchase.
*Harlequin Enterprises ULC (Harlequin.com) is located at Bay Adelaide Centre, East Tower, 22 Adelaide Street West, 41st Floor, Toronto, Ontario, Canada M5H 4E3 and sends informational and promotional emails on behalf of itself and Harlequin Digital Sales Corporation. Subscribers can unsubscribe at any time.
No thanks.